Start a Wiki
Cattleia Yoshinaga (吉永 かつ零亜 Yoshinaga Katureia) is the mermaid princess of the Southern Ocean.(The Southern Ocean incorporates the Amundsen Sea, Bellingshausen Sea, part of the Drake Passage, Ross Sea, a small part of the Scotia Sea, Weddell Sea, and other tributary water bodies which surrounds Antarctica.)and the keeper of the Cyan Pearl.

Cattleia is the mermaid princess of the Southern Ocean. She is also the keeper of the Cyan Pearl. Cattleia and her subjects has eyes and tails in different shades of blue, mostly cyan. Her kingdom was destroyed by Gaito, forcing the Southern Ocan mermaids to flee, including herself. She was lucky enough to reach the shores of Japan. During her stay there, she made herself a surname. Her human name is Cattleia Yoshinaga.

Cattleia is a happy-go-lucky girl. She is a bookworm, reading books whenever she has free time. In her class, she is the top student. She feels guilty leaving her subjects. She also loves visiting other kingdoms, especially Noel's whom she shares the same appearence(not twins).

Cattleia has long cyan hair that almost reaches to her fin. She also has cyan eyes. Her seashell bra is dark cyan. Her four pearl bracelets are cyan. Two on her tail and two on her left wrist. Her tail is also dark cyan. On her neck is the white oyster with cyan wings, containing the cyan pearl.

Cattleia has darker hair and eyes. Her hair is visibly shorter. She becomes taller. Her normal outfits consists of different colors, mostly cyan.

Cattleia doesn't do duets at all because she is independent while fighting.

"You have no right to judge me!" - Cattleia when a minion of Gaito judged her appearence.

"What? You have a problem with cyan?" - Cattleia when Sheshe complained after Sheshe saw her Mermaid form.

"No, I'm independent. Thanks anyway, Luchia." - Cattleia when Luchia offered her a helping hand when Cattleia told her that she rarely fights with a partner. 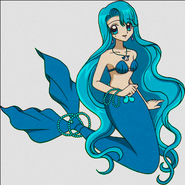 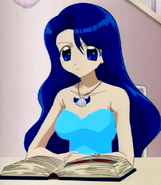 Cattleia's full body mermaid form.
Add a photo to this gallery
Retrieved from "https://mermaidmelodypopstarsfanon.fandom.com/wiki/Cattleia?oldid=7085"
Community content is available under CC-BY-SA unless otherwise noted.