Courtney is keeper of the black pearl. Despite being a mermaid, her goal was to defeat all other mermaids and rule the world. But then she met a mermaid named Iris Toiawase, and after they saved a boy named Marcus Mata, she promises never to do that, and instead defeat anyone who despises her. Her birthday is February 20, and she is 11 (as of Birthday Bash).

Courtney is a nice girl, but she can be mean at times. She develops a crush on any boy with red hair, like Marcus. Courtney is quite shy at times, but she opens her heart to make friends!

As a human, Courtney has white hair and gray eyes. Her seashell pendant is gray. She wears a red shirt with black polka dots, blue shorts, and sandals.

In her mermaid form, her hair is blue and her eyes are red. Her bra is black, and her tail is gray.

In her idol form, her hair, eyes and outfit are all black, except her gloves, which are sky blue.

Courtney has a voice that sounds similar to Seira's. Sometimes, however, she has a French accent. When she sings, her voice sounds more like Seira's. Her laugh is a little high-key, and she's working on laughing a little quieter. 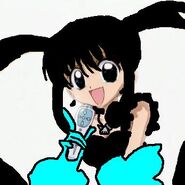 Courtney as a child 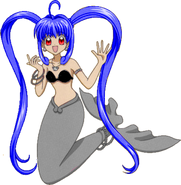 Courtney as a mermaid

Courtney: What about this?
Community content is available under CC-BY-SA unless otherwise noted.
Advertisement