Eirene, usually called Princess Reine (pronounced the same way as rain) or Bayoumi, is the current Princess of the Mediterranean and holder of the Sandy Pearl. She's seen as rather creepy by most people, but a harmless fortune teller to others. She joins Katyusha and Azumi later on during their journey.

In her Mermaid form, Bayoumi has a tan-ish tail and she wears her Pearl on a string around her wrist rather than on her neck. In its place she wears a neck piece of an ancient Egyptian style which, like the rest of her accessories, is gold. She has sandy blonde hair that she keeps short and throws in front of her face. On the rare occasions that you actually see her eyes, they're a pretty shade of white gold.

Bayoumi's human form looks quite different from her Mermaid form. Her hair extends down to her shoulders and turns greyish black while her eyes become dark, almost black, brown. Her skin tone also deepens somewhat, making it look like she has a bit of a tan, and she gains a splash of freckles across her face and upper shoulders.

Idol!Bayoumi wears a sandy colored pleated skirt that comes to about half way to her knees with a darker brown sash tied around her waist. She has a strapless shirt and fingerless gloves that cover almost her entire arms. Her hair is the blonde of her Mermaid form, but her eyes become black and she actually wears her Pearl around her neck for once.

Despite the fact that English isn't her first language, Bayoumi has no accent of her own to speak of though she's quite good at immitating Azumi's. She has a rather monotone voice when she speaks, but when she sings she has a decent range on the higher end of the scale.

Songs she sings with her Sandy Pearl Voice:

Bayoumi in her Mermaid form. 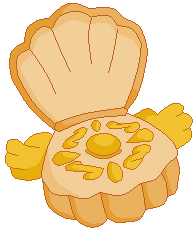 Her Sandy Pearl.
Community content is available under CC-BY-SA unless otherwise noted.
Advertisement