Iris is Courtney's best friend! She is a princess of the Northwest Pacific Ocean, and when Courtney attacked her kingdom, Iris convinced her to stop. Iris and Courtney then saved a boy named Marcus Mata from drowning, and she and Courtney become best friends!

Iris is ready to stand up for anything! She is never shy. For example, when Courtney attacked her kingdom, she managed to stop her. Iris rarely ever frowns, and smiles all the time!

In her human form, Iris's blue hair is a darker shade. She wears a orange, brown and red shirt, a purple skirt, and flip-flops.

As a mermaid, Iris's hair is more of a turquoise color. Her eyes, bra and tail are all pink, leading to her becoming a North Pacific Ocean mermaid.

Iris's hair, eyes, and outfit (except gloves, which are red) are all pink in her idol form.

Iris's voice has a Chinese accent. When she sings, her voice almost sounds like Sara's.

These are the songs she sings:

"Save the world! Jiko is evil!"

"Why accept judgment when you can have your own opinions?"

"This is embarrassing. We're no idols, we're just Japanese wannabes in cute dresses."

"What? I'm not fat, I just eat more than others do. That's not a problem!"

"This hunky officer is SO worth flirting with, and he's not even cute!"

Iris: One kiss, plus telling him the truth, means we're bubbles! 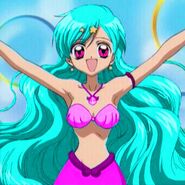 Iris in her idol form