Katyusha (often called "Kitty-san" by Azumi) is the youngest daughter of the prestigious Nosova family and the holder of the Dark Red Pearl. While under normal circumstances, Katyusha wouldn't have obtained the family Pearl, her sister's unique case rendered her unable to use the Pearl's true power and rule the sea. Growing up, Katyusha never liked leaving her home sea, and she still doesn't, but figures she has to if she's to save her sister.

In her Mermaid form, Katyusha has incredibly pale, almost white, blonde hair and piercing red eyes. Her tail is a slightly lighter shade of red than her eyes and her Pearl locket is black with red wings. Her seashell bra and various accessories are all black.

Katyusha’s appearance changes quite a bit between her Mermaid and human forms. In her human form, she has slightly darker hair and bright blue eyes. She wears rather risqué clothing such as short skirts and low cut shirts along with her Pearl locket.

I don't feel like describing it right now so take this picture instead.

Songs she sings in her Dark Red Pearl Voice: 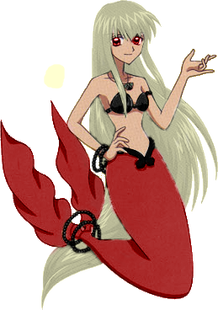 Made by Kiera the Bat :3 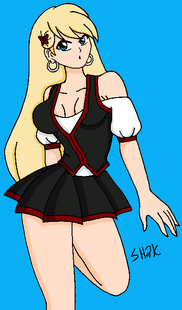 Made using a line art I found on DeviantArt.

Katyusha is not amused. 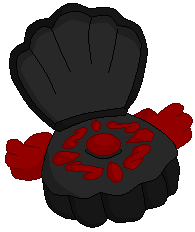 Her Idol form.
Add a photo to this gallery
Retrieved from "https://mermaidmelodypopstarsfanon.fandom.com/wiki/Katyusha_Nosova?oldid=6141"
Community content is available under CC-BY-SA unless otherwise noted.