Kodukuna is a quiet, loner-type girl. She's an orphan who only has one friend, but sadly she died. She has severe heart problems, and spends a lot of time in bed. She loves to sing, and has a wonderful voice, although with her best friend deceased, she doesn't have much will to anymore. thumb|300px|right|Her theme song!

Kodukuna used to be a happy, loving, shy girl, but after her friend's death she's lonely, and depressed. She's a loner by nature, and doesn't like large crowds. She often hides away from people, and is often picked on as a human. She does, however, have a soft spot for young children, and still sings them to sleep at the orphanage where she voluteers. She's taken a liking to Isis, and they play together often. This cheers her up a great deal, and has so far helped her with the depression.

Kodukuna has short, spiky cyan hair, pale milky eyes, green fish-like ears, very pale skin, and small green horns. She is very scrawny and thin, and has heart problems. She's a sickly girl, but she has a beautiful voice. She has a microphone tail, much like Mimi and Sheshe

As a human, Kodukuna has slightly longer, slightly darker turquoise hair, the same milky white eyes, and petite body shape. She's still too thin and sickly, and has the same pasty complexion, only she has regular ears and no horns.

Her outfit as a human is a green and purple jacket with a white stripe, a white Tee-shirt, turquoise sweatpants, and a purple and green hat. For her shoes, she wears black and white sneakers, and strangely enough, she wears glasses.

Kodukuna has a higher pitched voice, that sounds amazing when paired with Shisha's low voice. She doesn't sing much anymore, but when she does, it's very enchanting. 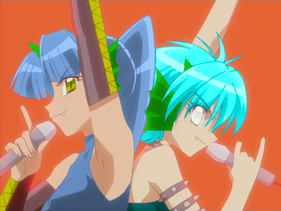 That's her on the right. 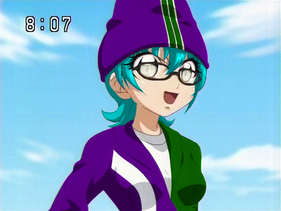 Kodu as a human!
Add a photo to this gallery
Retrieved from "https://mermaidmelodypopstarsfanon.fandom.com/wiki/Kodukuna_Fuun%27na?oldid=5553"
Community content is available under CC-BY-SA unless otherwise noted.