Lunete (who went under the alias Luna for the longest time) is the antagonist the characters encounter the most in Looking for a Title. Not much is known about her except for that she's involved in the disappearances of Mermaids somehow. She seems to be acting under the orders of a mysterious woman. Since the revelation of her real name, Bayoumi has found out that her surname is Charbonneau and that she's part of the small French minority in the English channel. And that she was one of the first Mermaids reported missing.

In her Idol form, Lunete has black hair that's held in a ponytail and brushed over her left eye. Her eyes (or her right eye at least) are a piercing incredibly pale blue. She wears a purple corset over a skin-tight black dress that splits open around her thighs and goes to a bit above her knees at its longest point. She has knee high purple boots, black gloves, and wears her Artificial Pearl around her neck.

Lunete has a pretty clear and high voice, which isn't something you'd normally expect from a villain. Nevertheless, her attack songs are ear splitting and she's a fearsome opponent. She also speaks with a light accent that the main characters can't quite pinpoint. 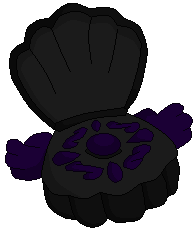 Lunete's Artificial Pearl.
Add a photo to this gallery
Retrieved from "https://mermaidmelodypopstarsfanon.fandom.com/wiki/Lunete_Charbonneau?oldid=6120"
Community content is available under CC-BY-SA unless otherwise noted.