Shisha is a Tsundere type girl, but she has a sweet side that she only shows to Kodu. She's Kodukuna's dead friend, and she died to save her. She's often scorned or ignored, so she's quiet sad usually. The only person so far who can make her smile is little Kodu. She's more cheerful nowadays, and has taken a liking to the Princesses.

Shisha is a Tsundere type, but she can be nice when she wants to. She has a diminished sense of trust, due to being the object of scorn as a child. She's not too friendly, but she can be if given the chance. She loves her friend so much, that she died to save her life. She's a ghost now, but she can touch people, unlike Sara's spirit shards. She's happier now, and loves to play with Kodu and the Mermaids.

Shisha is a tall, beautiful girl with long, sleek perriwinkle blue hair, lemon yellow eyes, and tan skin. She has green fish-like ears just like her friend, Kodukuna, and a microphone tail.

Shisha has a lovely voice, that's somewhat low but not quite alto. She loves to sing, but her voice can be found quite haunting sometimes. 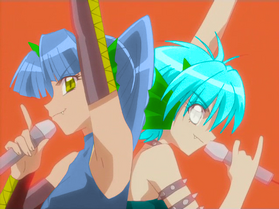 That's her on the left!
Add a photo to this gallery
Retrieved from "https://mermaidmelodypopstarsfanon.fandom.com/wiki/Shisha_Tandoku?oldid=5552"
Community content is available under CC-BY-SA unless otherwise noted.