Stacy is a green mermaid. She always seems to be reluctant on truth and love, but when Courtney met her, she asked her what to do to win Marcus's heart. Courtney tells her to butt out. The next day, she comes to school in her idol form, and starts singing to Courtney. She is affected, proving Stacy was on Jiko's team. Stacy then suddenly apologizes, telling Courtney that Jiko had taken control on her, but now she's back to normal. The two become friends then. Due to the fact that Stacy looks and sound like Rina, some people mistake Stacy for Rina.

Stacy is a lonely young girl. She is popular among men, but whenever they ask her out, she rejects them, claiming that "there is already someone she loves on the other side of the world".

In her human form, Stacy's hair is green, and her eyes are blue. She usually wears a pink shirt, jeans, and sneakers.

Stacy's hair, eyes, bra and tail (yes, ALL of them) are green.

Stacy's hair has beads in it, and is still green. She also has green eyes, and a green outfit.

Stacy's voice is the same tone as Rina's, except just a little bit higher.

These are the songs she sings: 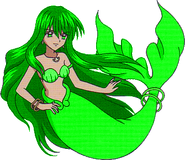 Stacy in her mermaid form

Stacy in her human form

Stacy in her idol form