Thirza is the adopted daughter of Noel, and the adopted sister of Destiney. As a human, her name is Thirza Cove (adoptive name), and she gets red and turquoise streaks in her hair. She loves to make friends, and especially likes animals. She would love to have a cat, but she has mild allergies so she can't cuddle them. Thirza loves to play with the other Mermaid Princesses, and loves to visit the other kingdoms. Her favorite place to be is with her beloved sister, Destiney, and with Noel. It is rumored that she is actually the abandoned daughter of Coco.

Thirza is a kind, loving, and playful girl, who loves to make friends. She has a real temper sometimes, and can blow up without warning, but she almost never gets angry with her friends. She can be quite shy sometimes, and doesn't talk much unless she really knows someone, so she isn't comfortable with new people. She hates crowds, and especially hates loud noises. She actually broke down crying from too many noises. She loves to be with her friends, anytime and anywhere.

As a human, Thirza has darker blue eyes. She has charcoal grey hair with turquoise streaks on her bangs, and red streaks on her ends. She's pretty tall for her age, at around five foot three, with a well developed chest.

As a human, Thirza has a green heart-shaped pendant, given to her by her mother. She also carries a photo of her adoptive family, Archer, Noelle, and her Onee-chan Destiney. For her top, she wears a light gray Tee-shirt, with a large stripe of citrus green on the chest area, going all the way down to the bottom. She also wears long dark blue jeans, that are somewhat too big for her, and for shoes she wears dusty white sneakers.

As a mermaid, Thirza's eyes are lighter blue, and her legs turn into a long, citrus green mermaid tail. Her hair grows much longer, and turns citrus green with black streaks instead of turquoise and red. Her skin is slightly paler in this form, but her rosy cheecks remain the same.

Thirza's mermaid attire follows the trend of all the other princesses. She wears a black seashell bra with a black pearl strap, and two black strands of pearls on her tail and right wrist. She has a citrus green oyster pendant, with jet black wings.

Thirza's voice is smooth, and clear, but sometimes it gets scratchy. She can imitate several accents, like german, british, and scottish. Her singing voice is a low-key, similar to Taylor Swift. She's good at imitations, varying from cartoon characters to her friends. Her laugh is similar to her sister's, only a little more mischievous and tomboyish, and sometimes it's more of a belly laugh!

Dessie, where are you!

QUINN!! Fire is not a play thing! 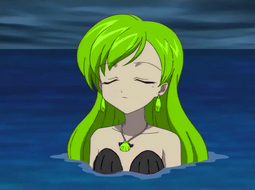 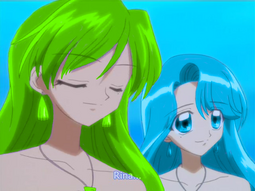 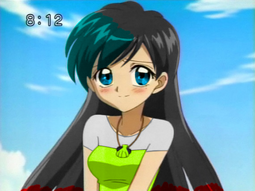 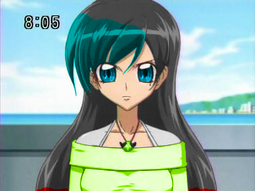 Thirza: And what's that supposed to mean? 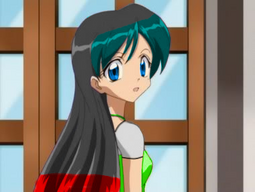 Made by Kiera the bat! 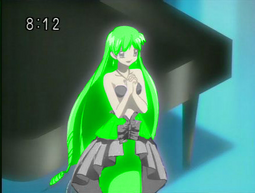 Credit to MewArcticWolf! Thanks so much! 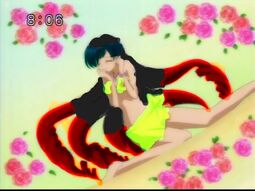 Made by Tia, thanks a million! 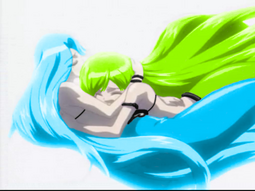 Thirza: I thought you were gone forever! 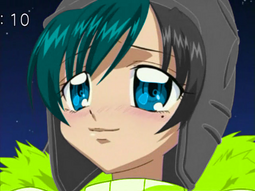 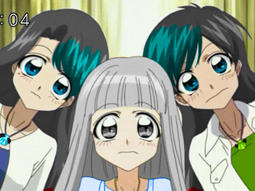 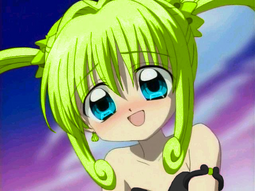 Thirz as a child. Ain't she cute?

credits to mewarcticwolf
Community content is available under CC-BY-SA unless otherwise noted.
Advertisement