Tianshi Banira is a young Tokyan colored mermaid, who is always by Darangel Cove as her "sidekick", as she claims. She enjoys viseting the North Pacific Mermaid Kindgom to play with the young princess Sieanna. ONe of her favorite things to do is actually swim with dolphins and pretend to be one.

Tianshi is often called the girl who is the clueless idiot, since she can be very blind to the state of reality and all that's in it. She can get herself into bad situations with the Sea demons, since she can easily beleive that their tricks are real. Although she is very strange, some people such as Darangel can see a real young girl behind the eyes of this mentally blind child.

As a mermaid, Tianshi has Heterochermia, meaning she has two differently colored eyes. One of them is Rouge Red (or Candy Pink), and one of them is pale blue. Her hair is grey with some pale blue streaks in it, since she likes looking different. Like Darangel or any other Tokyan Mermaid, she has a Rouge Red Tailsfin, that looks a bit more neon under water. 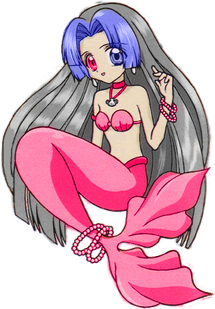 Tianshi likes to wear fake Mermaid Princess clothes!
Add a photo to this gallery
Retrieved from "https://mermaidmelodypopstarsfanon.fandom.com/wiki/Tianshi_Banira?oldid=6414"
Community content is available under CC-BY-SA unless otherwise noted.